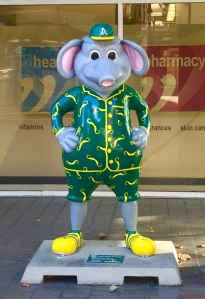 This past spring, as I was walking, I noticed these “things.” It was the same “thing” in different locations, painted different colors. The plaque on them said Oakland A’s Stomper. Ohhhhhhh, it’s an anteater, an aardvark. It’s hard to have a mascot for athletics, so have a mascot with a name that starts with an A. This is the Oakland A’s Stomper and yes, you stomp on ants

That was creative and wrong. It’s an elephant. Apparently my mind is a little weird and I reckon I’ll just embrace it. In 1902, New York Giants manager John McGraw told reporters that Philadelphia manufacturer Benjamin Shibe, who owned the controlling interest in the new team, had a “white elephant on his hands”, team manager Connie Mack defiantly adopted the white elephant¹ as the team mascot.

resurrected as the mascot in 1988.

Today I went to a community meeting hosted by the A’s to discuss the new ballpark. People were for and against the new location, voices were heard from a variety of points of views from jobs, traffic, environmental impact and gentrification. We were seated at tables with our neighbors focused on a topic that impacts us all, a new ballpark in our neighborhood. What I saw was  a meaningful discourse. What I heard were people who voiced strong opinions, but, there was an opportunity for the A’s to give background and context and acknowledgment that many of these concerns had been factored in. It was an us and we versus there tribalism of a nameless “them.” People can behave with civility. I sat and smiled; I’m part of it. The goal for the new facility is to be uniquely Oakland. With this group and this approach, it can’t help but be both unique and Oakland

A huge thanks to the Johnsons for their generosity. Best way ever attend an A’s game – suite life.

¹a possession that is useless or troublesome, especially one that is expensive to maintain or difficult to dispose of.