Relationships, dating, marriage, my mind tries to reconcile rules and logic for what works and what doesn’t to make up for my limited and nonexistent experience. So, please understand both my confusion and fascination with the Conways. Yes, some people read trashy novels for the summer, I succumbed to a couple of hours of mindless internet searches. Multimillionaires, Kellyanne is counselor to the president and George is an attorney. George is known for his opposition to his wife’s boss and has actively shared his views be tweeting and penning op-eds.

Kellyanne wants you to know that she’s too busy raising their children and doing “substantive” work for the president to keep up with her husband’s tweets. And George Conway is openly saying that his wife works for a mentally ill criminal.

Really, how does this work? Is this an action thriller, dark comedy or parable of our times? Or, am I making too much of it and this is the public unraveling of a marriage? Please, I really want to know. What’s dinner like in that household. Get the TV cameras in there.

This has everything. Comedic salvos between George and his wife’s boss; tragic commentary on the state of the union versus the state of a union and the mystery of how this works. It seems deeply personal made very public. Is supper with these two dinner theater or a to do list of the kids’ activities. I’m guilty, my trashy summer read is available in 280 characters per tweet and courtesy of news op eds. It’s summer, it’s brain candy; I’m not proud, but I am hooked.

Kellyanne Conway sided with Trump over her husband, telling Politico: “He (Trump) left it alone for months out of respect for me. But you think he shouldn’t respond when somebody, a non-medical professional accuses him of having a mental disorder? You think he should just take that sitting down?” 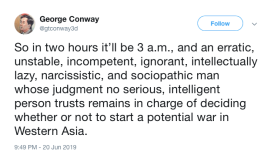 As part of a profile on their relationship in the Washington Post’s style section, Kellyanne Conway has spoken out for the first time against her husband George’s tweets criticizing President Donald Trump. “It is disrespectful, it’s a violation of basic decency, certainly, if not marital vows,” the White House counselor told Style reporter Ben Terris, before adding that she wanted those quotes attributed to “a person familiar with their relationship.” When Terris told her he could not put her comments “off the record” after the fact, Conway ultimately added, “Fine. I’ve never actually said what I think about it and I won’t say what I think about it, which tells you what I think about it.”

← Gun Control is not Happening; Here’s Why
Based on a True Story, the Revolutionary War, the Statue of Liberty and the Fourth of July →