Because people were bombing black churches and he preached

Because he protested the Viet Nam, a war in which McNamara admitted we couldn’t win and he spoke out

Because his message and actions were nonviolent

On January 14, 1963, King’s contemporary, George Wallace took the oath of office as governor of the state of Alabama. In his speech, the line that stood out was:

In the name of the greatest people that have ever trod this earth, I draw the line in the dust and toss the gauntlet before the feet of tyranny, and I say segregation now, segregation tomorrow, segregation forever.

In September of 1963, Wallace attempted to block 4 black students from enrolling in 4 different elementary schools in Huntsville. After federal intervention, they were allowed to enroll on September 9, 1963 to which Wallace responded “The President (John F. Kennedy) wants us to surrender this state to Martin Luther King and his group of pro-communists who have instituted these demonstrations.” On Sunday, September 15, 1963, when four members of the Ku Klux Klan planted at least 15 sticks of dynamite attached to a timing device beneath the steps located on the east side of the church; four dead and twenty two injured. These acts of violence did not deter King or weaken Wallace. 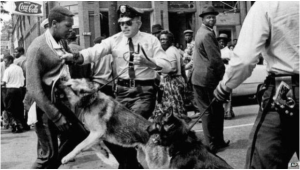 From March 7 – March 25 of 1965, King led the march from Selma to Montgomery, Alabamawas for voter rights The march started with 600 and ended with about 25,000 people for the end of discriminatory practices barring blacks the right to vote such as poll taxes, literacy tests which were applied subjectively. After Bloody Sunday were marchers were beaten and bloodied by state troopers as they approached the Edmund Pettis Bridge, President Johnson in a speech said,

“Every man should have the right to vote and that the civil rights problems challenge the entire country, not one region or group. “ and the President asked Congress “to help him pass legislation that dictates clear, uniform guidelines for voting regardless of race or ethnicity and that allows all citizens to register to vote free from harassment.” 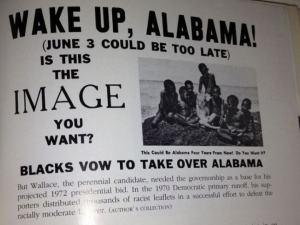 Johnson went on to sign the Voting Rights Act of 1965 that August it was a step forward, but by no means a fait accompli in race relations. On April 4, 1968 Martin Luther King Junior was assassinated in Memphis Tennessee. In 1970, in a run for his second term as governor, Wallace ran what has been called the most racist campaign ever. Wallace aired television advertising with slogans such as “Do you want the black bloc electing your governor?” and circulated an ad showing a white girl surrounded by seven black boys, with the slogan “Wake Up Alabama! Blacks vow to take over Alabama” It’s worth noting that Wallace stated, “I’ve never made a racist speech in my life.” It seems fitting to end the story on Wallace here and cast him as a villain; but I can’t.

It gets more interesting. During his third run for US president as a democratic candidate, in 1972, Wallace was shot in an assassination attempt. He tried for a fourth run at the presidency in 1979. Then in the early 80’s, he contacted civil rights leaders he’d opposed in the 60’s and 70’s including now Congressman John Lewis who suffered a fractured skull during Bloody Sunday. He made phone calls. He gained the support of the African-American electorate and in 1983, became governor of Alabama for the third time AND made more African-American political appointments than anyone else in Alabama history. The Johnson tapes describe George Wallace is described as someone who does not listen and does not trust anybody.  One of his three wives said, “I don’t believe George needs a family. He just needs an audience. The family as audience wasn’t enough for his ego.” What caused the reversal? Is it possible once shot and confined to a wheelchair, he had to trust and take counsel in his recovery and everyday life. Is it possible, the vulnerability changed the ego?

NPR aired an interview Recy Taylor from a few years ago as a follow-up to a speech by Oprah Winfrey last week during her Golden Globe acceptance speech. In 1944, 6 men kidnapped and raped her as she was walking home from church. Despite being told to keep quiet, Mrs. Taylor reported crime. The first trial ended after 5 minutes of deliberation by a jury of all white men ad dismissed. The second trial, the defendants admitted to the rape,but the all male, all white jury refused to indict. Her home was firebombed. There were some who said, well it was consensual, that Mrs Taylor was a prostitute. She received death threats from white supremacist for 25 years until moving to Florida. The state of Alabama apologized in 2011. The sentiment was, well that was the time, that’s how we were raised, everyone did it. Is this a legacy we want to embrace? Because Alabama is all of us and it’s happening again.

In the recent Alabama Senate race is the story of Judge Roy Moore. A man who was removed from the Supreme Court of Alabama for refusing to obey a federal court order. A man banned from the mall in Gadsden, Alabama because of his predatory behavior toward young girls. When accusations of sexual assaults came forth from women who were 14 and 16 at the time, his supporters said, well it was different back then, we don’t know if it’s true. An exasperated Charles Barkley finally said to Alabamians, “We’ve got to stop looking like idiots, do not vote for Roy Moore.” It was a win for Doug Jones.

Because he refused to shake the hand of Angela Merkel

Because after Charlottesville he said “violence on both side”

Because he said of Carly Fiorina in a Rolling Stone interview “Look at that face. Would anyone vote for that? Can you

imagine that, the face of our next President? I mean, she’s a woman, and I’m not supposed to say bad things, but really, folks, come on. Are we serious?”

Because 19 women have accused him of sexual misconduct including assault

Some media outlets have spun his last statement, “well he said what we were all thinking.” Or as he himself said, “I used strong language” His supporters when interviewed said, they don’t believe he said it, but if he did it’s not good. Today, he said, “I am not a racist, I’m the least racist person you have ever interviewed.” Yes, and as noted before, George Wallace said “I’ve never made a racist speech in my life.” How do we want to go down in history. Is this another time when racism, sexism and assault go unchecked because, it is the time and we can’t be sure?

¹President Trump has questioned the authenticity of the Access Hollywood tape. On December 3, 2017, Billy Bush authored an op ed piece in the New York Times, Yes, Donald Trump, You Said That https://www.nytimes.com/2017/12/03/opinion/billy-bush-trump-access-hollywood-tape.html

© Sheila P. Thorne and bousbous.com, 2014. Unauthorized use and/or duplication of this material and photographs without express and written permission from this blog’s author and/or owner is strictly prohibited. Excerpts and links may be used, provided that full and clear credit is given to Sheila P. Thorne and bousbous.com with appropriate and specific direction to the original content.
Loading Comments...
Comment
×
<span>%d</span> bloggers like this: